skip to main | skip to sidebar

Sorry guys for being MIA for the week! My excuse, and I'm sure you will find is a good one, I was in Prague. Being my third time there I did not have high expectations because the city is not my favorite. Actually Prague ranked second in my worst list behind Bologna (Italy) before I went. But after this weekend I can now say it has moved from my worst cities to favorite cities list! 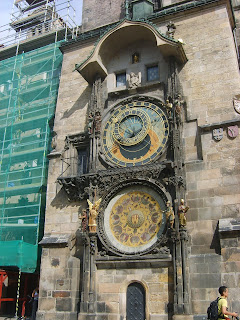 It took me about 6 hours to get there. My bus ride was rather nice. I went with a company called OrangeWays. I would recommend them. They had a nice stewardess who was extremely helpful and pleasant. They had free hot drinks and new movies playing . The problem was I had to do the sub-title thing as they played the movies in Hungarian!

After arriving I got lost! (Shocker!!!). Originally I had two hours from between when my bus arrived and when I had to meet Jane at the train station. My bus arrived an hour late and I was lost in the city for about 30 minutes before arriving, so I had only a 30 minute wait.

Once I found Jane we went about trying to get a hostel. Disaster. We booked with a company that finds last minute places to stay, they sent us to hell. Okay maybe not literally but it was pretty close. I do not recommend Crib 15!!!! Not only did we stay all of 5 minutes, we spoke with other guests who said it was the worst hostel they had been to and as we waited for a refund someone else was asking for a refund. So we packed up and went back to the booking company and were directed to Apple. 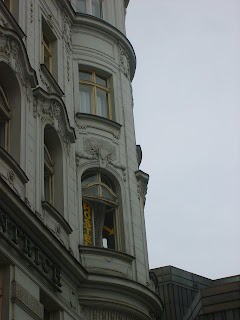 As far as hostels go it was nice. This hostel had more male guests than female, and as the shower and bathrooms were not connected to the room we saw many half-naked guys for the weekend. It was about insane, at one point we kept commenting to one another that we were in a nudest colony. Can't say that I minded, luckily the guys were all very easy to look at! 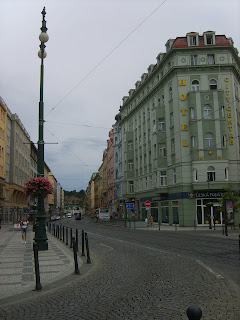 Also it was located really close to everything. We had to walk two minutes to be at the main shopping street, the tourist street, or the train station. Plus it was a very nice area of town.


So after we got settled in our hostel it was nearing 9 at night and we were famished. We set off blindly looking for a restaurant, and stumbled upon one we had been to two years prior! It was a good trip down memory lane.

We ate pasta stuffed with cheese and topped with tomato sauce. (Jane is vegetarian so I didn't eat meat on this trip.) 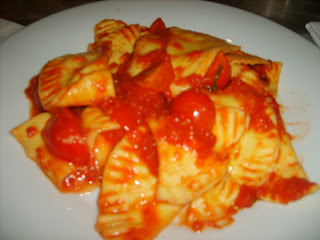 And split a Mint Iced Tea 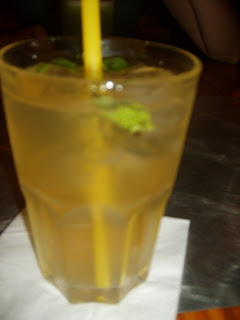 and a cucumber lemonade. 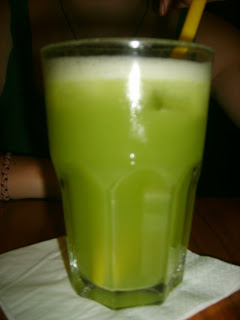 The mint iced tea was delish, the cucumber lemonade tasted like cucumber puree so it was refreshing just not the best drink in the world!

After leaving the restaurant we immediately went back to the hostel and crashed!


So in the next few posts I plan on sharing the rest of the trip, giving tips on traveling, and of course how it is possible to lose weight and travel. If you guys want me to address anything specific just ask!
Posted by The International Loser at 9:39 AM 1 comment:

In a totally personal victory I just got approved for a two year Hungarian visa!!!! I applied for another 6 month visa (because that is what they gave me the first time) and walked out of the immigration office being able to stay here until 2012. I probably won't stay here until 2012 but it is nice to have options!

Now I'm off to celebrate with a few of my Hungarian/ Latvian friends......and for once the celebration is not going to be centered around food or booze! I'm not sure about you but in my life celebrations of any kind (birthdays, weddings, graduations, etc) are rewarded with food. That is definitely something that I have had to work to overcome and will be facing a lot more in 2.5 weeks when I am stateside.

How do you celebrate without food?
Posted by The International Loser at 10:23 AM 2 comments:

Sadly there will be no fireworks or BBQ's for me. I had to find something else to occupy my time in a country that does not celebrate my holiday......Shopping. 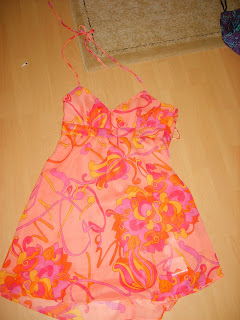 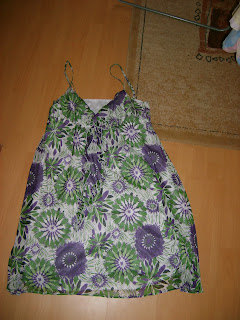 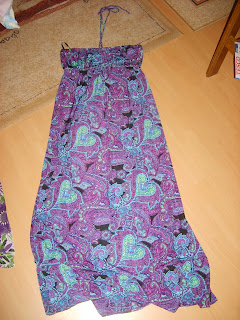 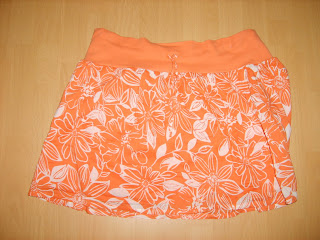 I am still really shocked with myself for being on a dress kick. I've never wanted to wear dresses or skirts, and all I buy these days are dresses and skirts! My mom even commented on that last night! But they are cute and fun.The three dresses are from the same line: colours of the world. The skirt I bought for $2.75, it was a steal! I'm glad to be able to shop in the normal sizes for tops and dresses! 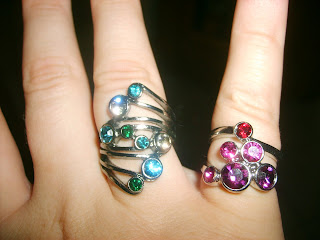 In addition I also bought these rings. I don't usually wear jewelry, but they are fun and go with my purple dress so I went ahead and picked them up! (Thanks to Leila for teaching me how to take a better picture!)

And in random fun news that made me smile another store set up and American section today. Included again were the typical American foods, but it had peanut butter, ketchup, pancake mix, cranberry juice, and hot dog/hamburger buns. I passed on all the items because why they were extremely affordable (for an American product in Europe) I'll be stateside in 3 weeks, and it wouldn't be worth it to buy it now! (Plus the PB was chunky and I like mine smooth!)
Posted by The International Loser at 10:34 AM 4 comments:

So it's been an amazing Saturday.

I got in two long bike rides. I've found that I enjoy biking so much. When I first came to Hungary I was wobble on the bike! My thighs hurt every time I rode and frankly I contemplated leaving the lock off the bike in hopes it would get stolen.....glad I didn't resort to desperate measures because I prefer the bike now!.......Biking in Europe is common. There are bike paths everywhere here, so frankly it is very safe. The one thing I hate is crossing the street, but biking is practical form of transportation. In Verona and Munich I walked everywhere, since I was always in the center of town. Now I'm close enough to walk, but I'd rather spend 5 minutes on the bike as opposed to 20 by foot!

After cycling the kids and I went to the park...... 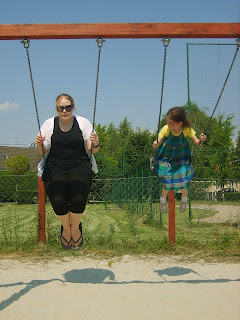 Can you tell that I am concentrating on swinging! It is such a fun work out! I like to swing or play on the teeter totter with the kids....I may or may not be a big kid myself!

I found this at the Aldi. Sheep cheese. I'm not a big cheese fan unless it's Gouda, then I'm all over it. But I wanted to try some cheese on my salad so I picked it up, and honestly it was because it said light and I understood what I was buying! (Being the blonde I am I actually translated that schaf meant sheep in my head before seeing the picture of the sheep! Yikes. ) 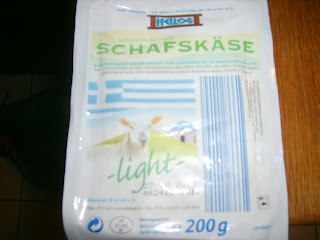 and sprinkled it on top of my cucumber and tomato salad. 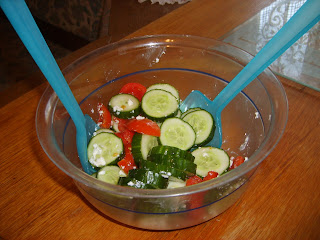 The verdict......Es schmeckt gut! Which translates to it tastes good! (German packaging..German review?)


And to celebrate the 4th of July I bought these.... 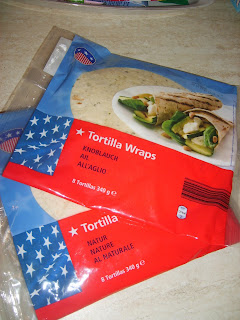 Tortillas! I was shocked when I saw the Aldi had a little American section this week. Although, the food was rather sterotypical: marshmallows, muffins, chocolate chip cookies, etc. These products are hard to find in Europe! The tortillas I am glad to have found because I usually spend three times as much at the Tesco for less. Now if only they had Peanut Butter....

Happy 4th of July fellow Americans! Hope it is a good one!
Posted by The International Loser at 11:08 AM No comments:

The International Loser
You will find all you need to know (including pictures!) in my About Me Post so go ahead and check it out! Start- 286 lbs Current-218